Is your home over 100 years old and of historical sigificance?

Tell us more and see if you qualify for our historical plaque program.

Your Membership helps ensure our organization will be around for generations to come.

Did you guess correctly?

At the Sandusky County Historical Society booth located in the Historical Barn during the county fair, exactly 100 people correctly guessed the “What is It?” item as a BEE SMOKER. From those entries, three names were drawn for a free year of SCHS membership. Winners were: Julie Jaeger and Tracy Michael from Fremont and Carol Schalk from Tiffin.

This bee smoker was manufactured by the A. I. Root Co. from Medina, Ohio. Amos Ives Root was inspired by a swarm of bees that landed on his window to begin his very first business–beekeeping–in 1869. He was behind many advances in beekeeping, leading the movement to standardizing beekeeping equipment. When asked by a local priest to supply beeswax candles, A. I. Root’s son, Huber, developed a superior beeswax candle using hand rolled strips of beeswax from Root’s own hives wrapped around a wick. Now in its fifth generation, the family-owned company is now named Root Candles.

The “What is It?” items from past county fairs were: an egg carrier and a transom adjusting rod. 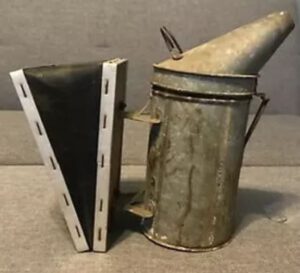 Fremont, located in Sandusky County, Ohio was originally known as Lower Sandusky and began as a village of Wyandot Indian natives. During the 1750s, the French constructed a trading post to participate in the fur trade with the Wyandots. During the late 1700s and the early 1800s, other colonial settlers moved into the area. During the War of 1812, the United States Army built an important American military post, known as Fort Stephenson where the current day Birchard Public Library now stands.

On February 12, 1820, the Ohio government sanctioned the creation of Sandusky County. Citizens named the county after an Indian term for “at the cold water.” Sandusky County was originally part of territory set aside for Ohio’s Indian people by the Treaty of Greeneville. White settlement of the county occurred very slowly, due to the Great Black Swamp occupying most of the land.

Fremont is also the home to our nation’s 19th president, Rutherford B. Hayes and is also the location of the first Presidential Library.  As you can see,  Sandusky County is rich in history and for this reason,  the Sandusky County Historical Society was born.

The Sandusky County Historical Society welcomes you to stop by to see the many artifacts on display and to let the history tell you its story through this self guided exploration of days gone by.

For the full history of our area you can visit the Ohio History Connection’s  website and read about Fremont and Sandusky County. 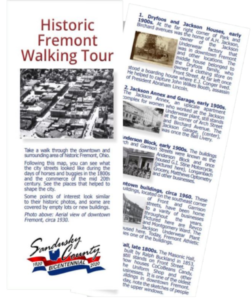 Members of the Bicentennial Committee have created a downloadable “Fremont Walking Tour” brochure that you can access here. Take a walk through the downtown and surrounding area of historic Fremont, Ohio.  Following this map, you can see what the city streets looked like during the days of horses and buggies in the 1800s and the commerce of the mid 20th

century. See the places that helped to shape the city. Some points of interest look similar to their historic photos, and some are covered by empty lots or new buildings. Photo above: Aerial view of downtown Fremont, circa 1930.

The Holderman House and the Museum are open May thru November.